A ‘Sky Whale’ of a flight 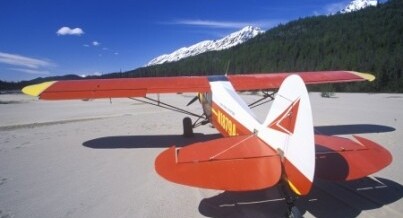 A three-decker plane resembling a whale may seem a bit far-fetched, but this new concept in aviation could change air travel as we know it.

According to an ABC News report, with a length from tail to nose of 263-feet, the Sky Whale could one day pack in 755 passengers. Picture an airborne Titanic – and that may prove a problem for passengers. Can you imagine in an emergency how long it might take to evacuate such a hoard? Line up everybody! It’ll be a while!

The person behind the concept is Spanish designer Oscar Vinals, who has shown a keen interest in the future of “green aircraft designs.” Therein lies the positive aspect of this monster-sized craft. Another plus: Advocates say the reduction in noise and greenhouse emissions would be a good thing.

But are we the only ones wondering what would happen in the event of an emergency landing? Disembarking over 700 passengers could prove to be a challenge.

At the other end of the aircraft spectrum is that little marketing workhorse: The Piper Cub. Compared to the behemoth craft envisioned by Vinals, our light and agile small aircraft serves two purposes nicely: Providing scenic flights over the Jersey Shore and offering merchants a fantastic advertising strategy that flies highly visible banners seen by beach-goers below.

Perhaps the real story is the little aircraft that could pull off a huge marketing campaign!