Who was first in flight? The plot thickens! 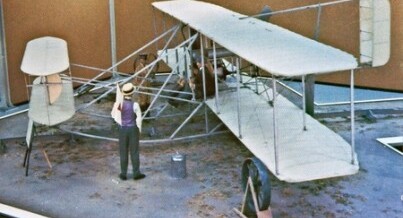 History tells us that Orville and Wilbur Wright were the “first in flight.” Their 852-foot, 59-second flight at Kitty Hawk on December 17, 1903, is recognized as the first manned, powered, and sustained flight of a heavier-than-air aircraft.  But could history have gotten it wrong? Were the Wright Brothers really the first in flight?

Some say it was a German-American engine builder named Gustave Whitehead who designed and built gliders and other flying machines. Whitehead claimed he flew a powered aircraft successfully several times in 1901 and 1902, two years before the Wright Brothers. Mainstream historians have long dismissed Whitehead. However, new photographic evidence may actually support Whitehead’s place in history as the first man in flight.

In 2013, Australian historian John Brown unearthed a photo taken from the 1906 Aero Club of America exhibition that shows a blurry photo in the background of Whitehead’s airplane while off the ground, which was taken in 1901.

Historians have long known that others were working on a variety of flying machines, including Whitehead. Whitehead’s flight took place in Fairfield, Connecticut, on August 14, 1901. His winged, bird-like plane called No. 21 or “The Condor” flew an estimated 1.5 miles at a height of 50 feet. The flight was witnessed by Richard Howell, editor of the weekly Bridgeport Herald newspaper, and others. The article was accompanied by a drawing which depicted the aircraft in flight and was purportedly based on a photo taken by Howell.

And, the plot thickens. The photo taken by Howell was blurry and the original photo has been lost. Whitehead died in relative obscurity in 1925. But a 1935 article in Popular Aviation magazine along with a book asserting Whitehead made powered flights in 1901 triggered a new debate among scholars and aviation enthusiasts that continues on.

The photo Brown analyzed seems to corroborate a report in Scientific American from 1906 about the Aero Club exhibition, which describes “a single blurred photograph of a large bird-like machine propelled by compressed air constructed by Whitehead in 1901 of a motor driven aeroplane in successful flight.” An enlarged section of the exhibition photo appears to be Whitehead’s plane in flight. Other scholars remain skeptical of Brown’s finding, including the Smithsonian Institution, which houses the popular Wright flyer exhibit.

The debate over Whitehead continues. Some believe he was the first human to fly a powered heavier-than-air machine. Others remain unconvinced that any of his planes ever flew. Yet, if Whitehead’s account is to be believed, that means that he was aloft two years, four months, and three days before the Wright Brothers’ famous flight.